Arezzo is a small fascinating town in Tuscany, only 80 km from Florence, a wonderful day trip if you want to see a different scenery. In fact the town still preserve intact its medieval appearance despite the addition of later constructions.

Several artists such as Giorgio Vasari, famous for the "Lives of the Most Eminent Painters, Sculptors and Architects" (Italian version) and Piero della Francesca worked here.

Piero della Francesca (1415-1492) was born in Borgo San Sepolcro, in Umbria, where he spent much of his life. He worked in Urbino, Monterchi, San Sepolcro and in Arezzo, where he produced the Legend of the True Cross in the church of San Francesco, considered as one of the most controversy and interesting Renaissance artwork. Admired by his contemporaries as a mathematician and geometer, as well as painter, today his works are admired for their serene humanism and use of geometric forms, particularly in foreshortening and perspective. 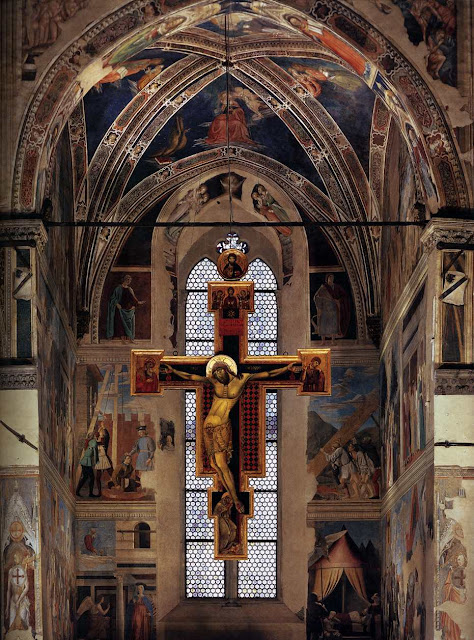 Completed in 1466, the Legend of the True Cross, is considered to be Piero della Francesca's greatest masterpiece and narrative medieval story about the cross on which Jesus was crucified. The dominant theme of the cycle is the thiumph of the cross which, since Adam's death, has been guiding man to salvation. The fresco occupy three levels on the side wall and the eastern wall, surrounding a large window.

To complete his work, Piero della Francesca did not follow a chronological order, preferring to concentrate himself in the creation of symmetrical correspondences between the various scenes. The story narrated in twelve main episodes represented in the various scenes composing the cycle, begins with the Death of Adam in the lunette of the right wall and concludes with the Exultation of the True Cross in the lunette on the left wall and the Annunciation at the bottom left of the center wall.

Here below a scheme of the narrative sequence: 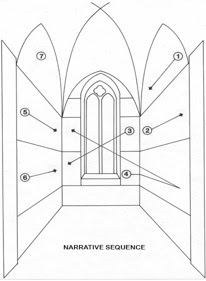 So, if you have got time, and you want to leave Florence for the day during your next holiday, go and visit Piero della Francesca's artwork in Arezzo.

Posted by Simona Albanese at 10:43 AM