Queensland....a beautiful place where to live in Australia...an article published yesterday for Nati con la valigia
This is the link:
Brisbane: Benvenuti nel Queensland
Posted by Simona Albanese at 12:26 PM No comments:

Where is the original Marcus Aurelius?

On the Campidoglio hill, where are all the main offices of the Sindaco of the city, two buildings host the Musei Capitolini of Rome, the eldest publique museum of the world (1471) founded in obedience to Sisto IV Pope's wish.

image from wikipedia
The Cordonata Stair and the entire square were projected by Michelangelo and strongly wanted by Pope Palo III before the visit of emperor Carlo V in 1536. The sacre place, once the center of the ancient Rome, was in ashamed conditions. Michelangelo suggested to build a third Palace, Palazzo Nuovo, to enclose the space of the square.
The project was finished only after Michelangelo's death but following his original drawnings. Nowadays, Palazzo Nuovo and Palazzo dei Conservatori host the Musei Capitolini, the first public museum of the history opened in 1734.
First rooms are dedicated to the sculpture and keep some beautiful Roman bronze statues as the Spinario, depicting a young man in the act of taking off a thorn from his foot or the famous Lupa Capitolina, feeding young brothers Romolo and Remo, a real symbol of Rome. The upper floor, dedicated to the painting, hosts works by Caravaggio, Veronese, Guercino, Rubens and Tiziano. 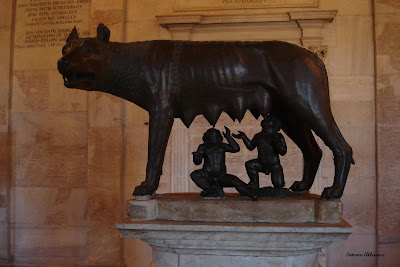 Lupa Capitolina
An underground passage will bring you to Palazzo Nuovo principally dedicated to the the sculpture. Palazzo Nuovo also keeps the original Marco Aurelio's equestrian monument once placed in the center of the square. 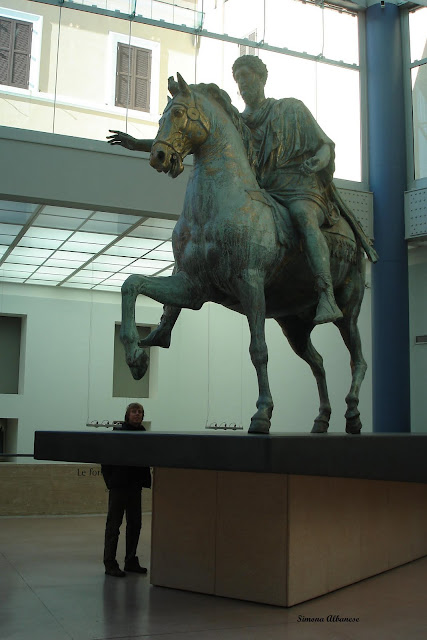 Scott and the Marco Aurelio 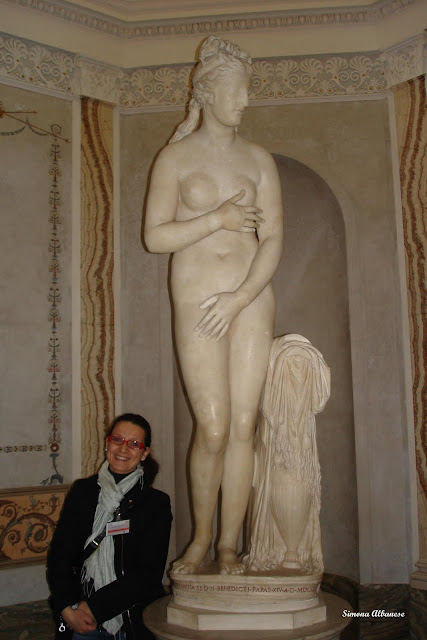 Taking a photo!!
For any further information:
Musei Capitolini
I LOVE ROME!!!!
Posted by Simona Albanese at 9:49 PM No comments:

In Piazza Trilussa in Trastevere, not far from Ponte Sisto, there is the monument to Carlo Alberto Salustri, nicknamed Trilussa (1871-1950), another famous poet of Rome for his sonnets.
Next week I will see this in person on my daily walk!!!
Posted by Simona Albanese at 8:43 PM No comments:

Coming out of there...who are you?

If you walk along Corso Rinascimento in the evening you come across many different politicians in the process of leaving Palazzo Madama, the main Baroque facade on this street. Here is where the Senate sits.

Originally the palace belonged to the Crescenzi family, a powerful Roman family, to then pass to the Medici family during the 16th century as part of the dowry of Alfonsina Orsini. Only later the current façade was enlarged to receive this enormous entrance. The name of the palazzo “Madama” has its origin in Margaret of Parma, illegitimate daughter of Charles V, who married Alessandro de’ Medici first and then Ottavio Farnese. The palace was purchased by the Pope Benedict XIV in 1740, to become successively the residence of the Governor of Rome and finally the seat of the Ministry of Finance for a short period of time during the second half of the 19th century.
Today the palace is the seat of the Senato della Repubblica or Italian senate, which together with the Camera dei Deputati in Montecitorio, compose the Italian Parliament.
Open to the public on the first Saturday of each month, excluded August, this place is worth a visit!
Buona visita!!
Posted by Simona Albanese at 12:31 PM No comments:

Today the northern hemisphere celebrates the first day of Spring!
... what better example than the Primavera or Birth of Venus by Botticelli, a key works in the Uffizi Gallery of Florence!


Are you planning a trip, or you have a strong passion or an interest in art...I organize private art group cafe' such as lectures at university and galleries, but also community education classes.


Posted by Simona Albanese at 9:56 PM No comments:


Scappiamo a Dunedin is a new article written for Nati con la valigia.
Posted by Simona Albanese at 8:44 PM No comments:

In Italy we celebrate Father's Day on March 19th, when for the Roman religious calendar is Saint Joseph, Rome celebrates this festivity with the Bigne' di San Giuseppe.
Here a simple recipe for you:
Ingredients
Direction


In a medium pot, bring the water to a boil over high heat. When the water comes to a boil remove the pan from the heat and add all the flour at once. Stir immediately until smooth. Add the butter and return the pan to medium heat and keep stirring. The flour and water will form a ball. You will need to stir until the ball no longer sticks to the sides or bottom of the pan.


Remove from the heat and allow to cool and then add one egg at the time. Stir each egg completely into the pastry before adding the next. Stir in the limoncello and vanilla.


Let the batter rest for at least 15 minutes. Using a soup spoon, place spoon size pieces of batter on a greased cookie sheet. Leave at least 2" between the drops of batter.


Bake at around 200 degrees Celsius for 10 minutes, then reduce the heat to 185 degrees Celsius. Bake for another 15-20 minutes, until golden brown. They will be approximately double in size. Turn the oven off and let the pastries "dry" in the oven.


Don't remove until they are completely cool. Gently open and fill with pastry cream or custard.


Dust the tops with confectioner's sugar.

Posted by Simona Albanese at 5:09 PM No comments:

Italy commemorates its 150 anniversary this year. Today, March 17th, is the day of unification, therefore many events have been organized for free in many different cities of Italy.


If you are in Italy on holiday today make the time to go and see one of them!!
Here a list for you:

at La Venaria Reale, which will reopen to the public, and will present the House of Savoy and celebrate the Reggia with its dazzling architecture, that makes it one of the finest examples of Baroque internationally.
FORLI'

Documentary exhibition of the Unification of Italy. The exhibition is divided in different sections, focusing on the events of the nation between 1859-1861, and in particular on how the political unification impacted on the society of Forli'.
The exhibition will be at the Archivio di Stato di Forli'
VENICE
Free entry at the Sale Monumentali della Biblioteca Nazionale Marciana
ROME


Today is a day to celebrate, so have fun and have a nice glass of spumante!!! 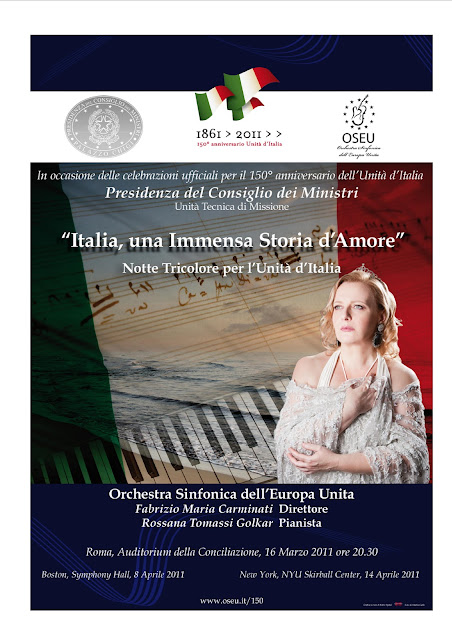 On 17 March, moreover, in order to ensure due solemnity and maximum participation in the celebrations of the anniversary of the 150th anniversary of the proclamation of the Unity of Italy, all museums, state parks and archaeological sites will be open free of charge .
Posted by Simona Albanese at 10:39 AM No comments: 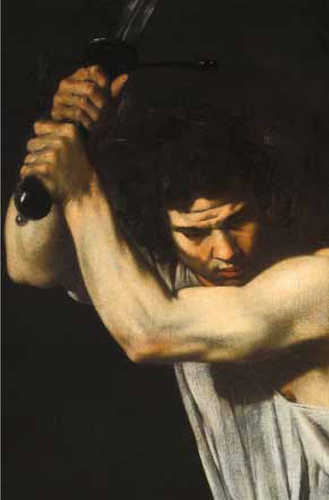 The city of Bitonto, in the Puglia region, for its history and the extraordinary evidence that this has left in the territory is set up as a city of art with a museum waiting to be configured in its best potential.
For the next two months the beautiful gallery will host another interesting exhibition on Caravaggio entitled:

Echi Caravaggeschi in Puglia
In this occasion approximately sixty works will be on display: portraits, religious, mythological, biblical and still life scenes from private collections, churches and museums all over Puglia will  look into the influence of Caravaggio in the region during the first decade of the seventeenth century.
The Gallery has a considerable number of paintings and drawings, most probably executed between the sixteenth and early twentieth century. Moreover there is a small collection of contemporary artworks.
The wide variety of works in the gallery is, without doubts, one of the reasons why this museum is highly appreciated amongst art lovers. In fact,
most of the collection consists of a big variety of artworks, by Italian artists such as Giovanni da Rimini, Titian and Veronese, or international artists, such as Fussli, Hamilton, Gros, Delacroix and Winterhalter. The collection has been donated by the Devanna brothers to the Italian State and today are part of the Italian patrimony.

DON'T MISS THE OCCASION!!
Posted by Simona Albanese at 7:31 PM No comments:

Posted by Simona Albanese at 12:32 PM No comments: