Rome: Christmas is not far!!!!

During this time of the year it is normal to go around and see Christmas decorations in many different cities of Italy and this happen even in Rome, where usually the Christmas tree is on in PiazzaVenezia.....and just yesterday afternoon my parents stopped in Piazza Venezia, where they found the tree already in position, but without decorations due to the rain and so...
when my dad has returned home he has virtually decorated the tree and sent a photo to me!!
....nevertheless rain or not both of them, with the umbrella on, have decided to have a walk around and enjoy the exhibition in Palazzo Venezia.....but this time I wasn't there!!

Posted by Simona Albanese at 11:46 AM No comments:

Do you want to study Italian in Italy?

If you have intention to leave sunny Brisbane to study Italian language and culture in an Italian University, this is a list of Italian institutions recognized by the Italian Government:

There are many to chose from....many different cities with lots to offer and see....
Posted by Simona Albanese at 2:47 PM No comments:

Time for a coffee and some Italian!!!

It's always time for a coffee....especially if it is good!! For an Italian coffee is in the blood!!! I like to enjoy this with people I love and want to share this with me... and like last year, when my dad was here in Brisbane we had a nice coffee and a chat in Italian while around the Gold Coast....but...I like to teach and converse in Italian during the summer in front of a coffee or a fresh drink....
This is a wonderful way to keep up the language...so why not try in the heart of Brisbane!!! 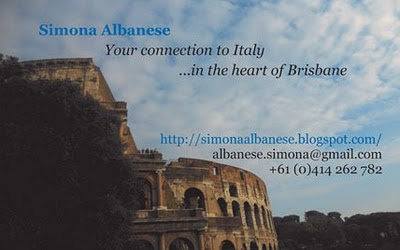 Just get in touch!!
Posted by Simona Albanese at 4:56 PM No comments:

Museums and music in Rome 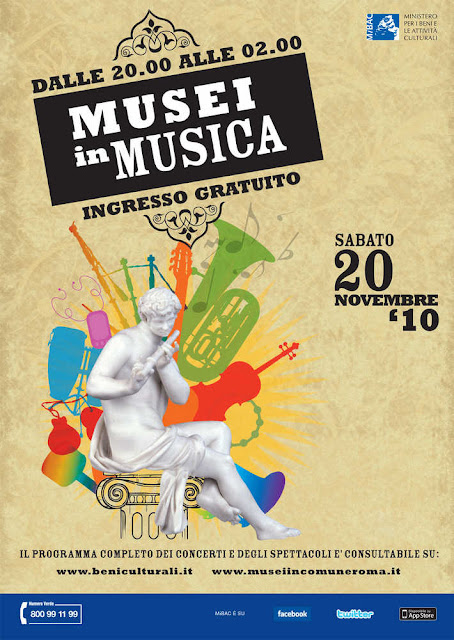 To promote the culture and bring more people to appreciate art, the Museums of Rome have been opened for free to the public bringing music on November 20th.


This was a wonderful event!!


Posted by Simona Albanese at 8:26 AM No comments:

The art of cooking!!!

Cooking is a passion and an art!!! My son Lorenzo loves cakes as most of the children, therefore here experiment with his dad!!!
Lorenzo has achieved his goal and he is only five....and he was happy with the result...especially when he shared the following day at school with his friends!!!

Posted by Simona Albanese at 1:40 PM No comments:

This is a must see place if you go on holiday in the Veneto region, in Italy.
All the information are on the link below:
Cappella degli Scrovegni in Padua

This is one of the first documented work by Giotto, who is really famous for the decoration of the Church of Saint Francis in Assisi.
Posted by Simona Albanese at 1:51 PM No comments:

Claudio Baglioni is on tour around the world.... Last night he has performed at the State Theatre of Sydney after Perth and Melbourne....Sydney was his last stop over in Australia.

This was is first concert on this part of the world!!

The concert was in a beautiful art-deco building in the centre of Sydney, so that made this event even more spectacular. Claudio has been really amazing and I have really enjoyed my evening there!!...plus I have had a fantastic afternoon in Sydney...
His tour will continue around the world to conclude in Rome on the night of the 31st of December.
Posted by Simona Albanese at 2:29 PM No comments:

Claudio Baglioni: from Rome to Australia

A loved Italian singer on the stage in Australia. I will go to the concert in Sydney tomorrow to listen him on live...on this other side of the world!!
Posted by Simona Albanese at 2:33 PM No comments:

A Venice Collection in Perth

This is an exhibition to not be missed!!!
Posted by Simona Albanese at 5:02 PM No comments:

From today at the Poldi Pezzoli Museum there is an exhibition on Sandro Botticelli. The exhibition celebrates the 500th anniversary of the death of the great master Botticelli presenting works belonging to pubblic collections from Lombardy and Milan.
For more information have a look to the museum site:
Museo Poldi Pezzoli
Posted by Simona Albanese at 2:19 PM No comments:

Madonna and Child by Jacopo Sansovino

For the art lovers this is a wonderful thing happened in Florence in the last few days! Medical technology has helped restore to life a terracotta Madonna and Child by Renaissance sculptor Jacopo Sansovino.
Florence art critics said they did not know exactly when the artwork had been broken and who was responsible for a series of restorations, which ruined it, altering the shape and colour of the piece.


The work was presented to the media in Florence before its return to the Civic Museum of Vicenza.


Jacopo d'Antonio Sansovino (1486-1570) was a sculptor and architect, and best known for his works around St Mark's square in Venice.

Posted by Simona Albanese at 1:52 PM No comments:

Pompeii...history...art....one of the most significant proofs of Roman civilization.....
The city has re-emerged from the darkness of centuries precisely as it would have been when it was unexpectedly buried in the thick layer of ash and lava which poured down from the devastating eruption of Vesuvius in 79 A.D.

All these was a few weeks ago and now the House of the Gladiators has fallen......
Posted by Simona Albanese at 1:07 PM 3 comments:

Email ThisBlogThis!Share to TwitterShare to FacebookShare to Pinterest
Labels: House of the Gladiators, Italy, Pompeii

Why you should learn Italian

You’re planning a trip to Italy...and you think you can go without knowing the language ..... it will be fun but a bit harder....
You’re married to an Italian or someone with an Italian background...like my husband...you need to learn the language...
You have an Italian background yourself ....well you want to go to Italy...learn the language!!!!
You know that learning Italian unlocks the door to Italy's cultural "ricchezze": the food, the fashion, the movies, the music, the art....
You work or do business in Italy or with Italians...you need a mental challenge...
....and then make new friends!!!


Call me today and we make a deal before Xmas!!

Email ThisBlogThis!Share to TwitterShare to FacebookShare to Pinterest
Labels: Why you should learn Italian

1861 marked the Unification of Italy. To celebrate this event a significant exhibition has been organized at the Scuderie del Quirinale between 6th October 2010 and 16th January 2011.

The exhibition shows how Italian painters depicted the events that led our country to the achievement of independence and national unity between 1859 and 1861. On display works by Francesco Hayez, Giuseppe Molteni, Domenico and Gerolamo Induno, Eleuterio Pagliano, Federico Faruffini, Giovanni Fattori, Silvestro Lega, Odoardo Borrani, Michele Cammarano, Giuseppe Sciuti and others.
On the night of the opening, 5th October, I went to the Scuderie del Quirinale to see the well presented exhibition.


The works, the draperies and environments were perfect for this historical exhibition....having the Palazzo del Quirinale, residence of the President of Italy, just on the other side of the square.
For any information:
Where: Scuderie del Quirinale

Palazzo Pitti is just over the other side of ponte Vecchio in Florence. On October 19th I spent an intensive day around galleries to see some of the wonderful exhibitions around the city!!
My first stop with my dad was at Palazzo Pitti to see the exhibition of Caravaggio e i Caravaggeschi 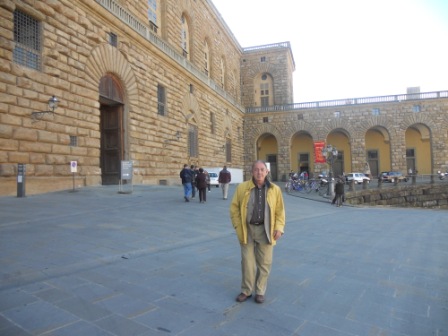 That's before we enter the exhibition: I have got the tickets on my hands!! 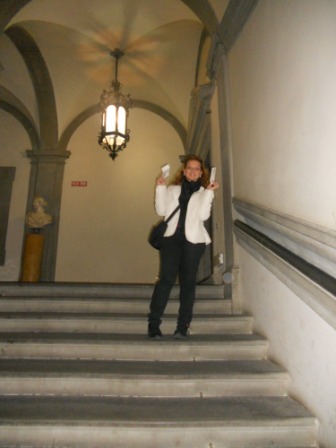 That's what we see from the window of the palace...the Boboli garden... 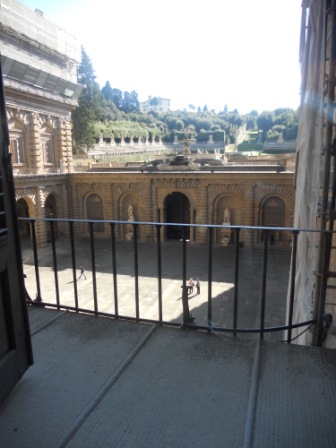 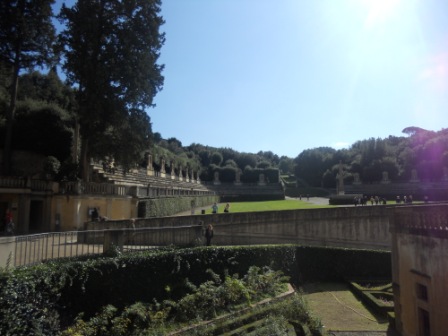 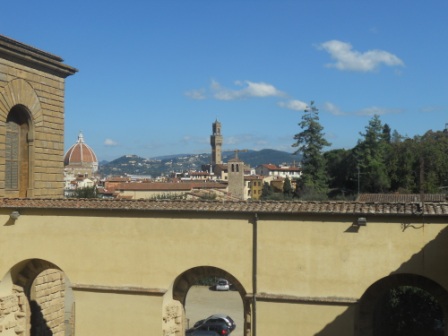 ...and a beautiful view of Florence 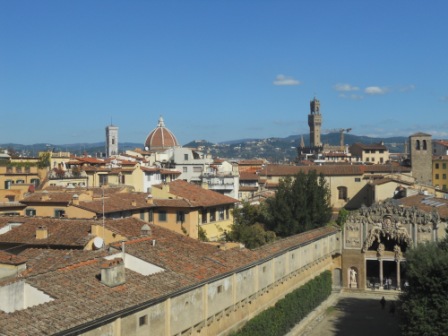 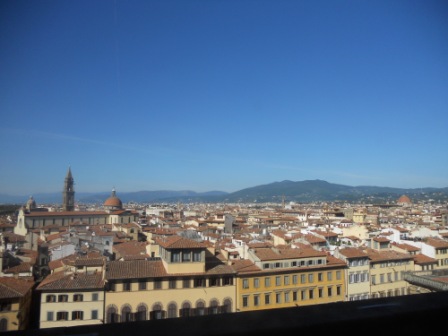 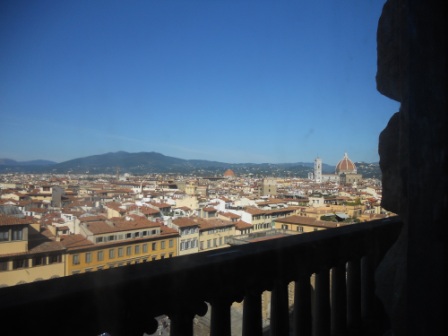 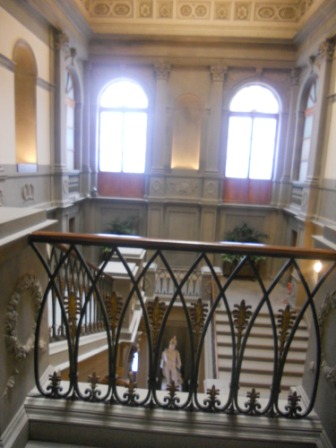 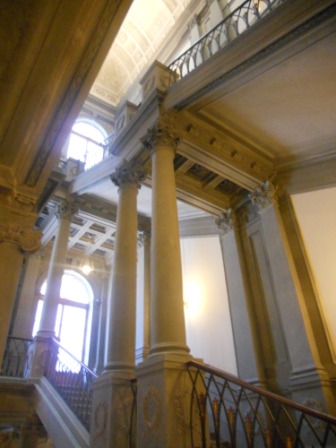 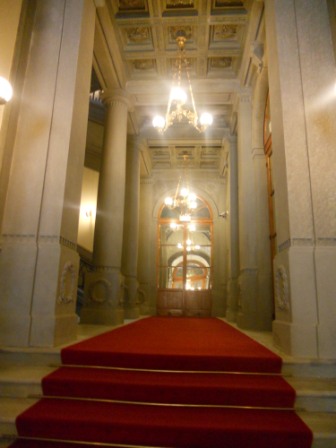 The Sistine Chapel is one of the most beautiful and perfect work in the art history!!!
Look this wonderful presentation on the Sistine Chapel clicking on the link .....it is amazing!!
My dad has sent me the link...just because I have a strong passion for art like him!!
Here a brief history of the Chapel:
The Sistine Chapel was commissioned by Pope Sixtus IV, from whom it derives its name, in 1475. It was designed to be the pope's chapel and the site of papal elections. In 1481 Sixtus IV called to Rome the Florentine painters Sandro Botticelli, Domenico Ghirlandaio and Cosimo Rosselli and the Perugian Pietro Perugino to decorate the walls with frescoes. The fresco project took only 11 months, from July 1481 to May 1482.
Michelangelo was called in a later time, being younger in comparison to the other artists. The Sistine ceiling was originally painted by Piero Matteo d'Amelia, who included a star-spangled sky. But in 1508 Pope Julius II della Rovere commissioned Michelangelo to repaint the ceiling. He worked on the project between 1508 and October 31, 1512, in cramped conditions high on a scaffolding and under continous pressure from the pope to hurry up.
Michelangelo was later called back to paint The Last Judgment (1535-1541) on the altar wall. The work was commissioned by Pope Clement VII (1523-1534) shortly before his death, and Clement's successor, Pope Paul III Farnese (1534-1549), forced Michelangelo to complete it quickly.
In recent decades, the Sistine Chapel has been carefully cleaned and restored, beginning with the 15th-century wall frescoes in 1965. The cleaning and restoration of the lunettes, the ceiling and The Last Judgment, a painstaking process using computer analysis, lasted from 1980 to 1994. The restoration included removing several of the "modesty" drapes (called braghettoni)   that were added over some of the nude figures later by Daniele da Volterra.
As a result of the restoration....some are happy ...some are not...you need to go and have a look by yourself and then you come make a judgement!!!
Happy vision!!
Posted by Simona Albanese at 12:46 PM No comments:

A friend and an artist with an Italian background....a new exhibition in Auckland starting on November 10th. 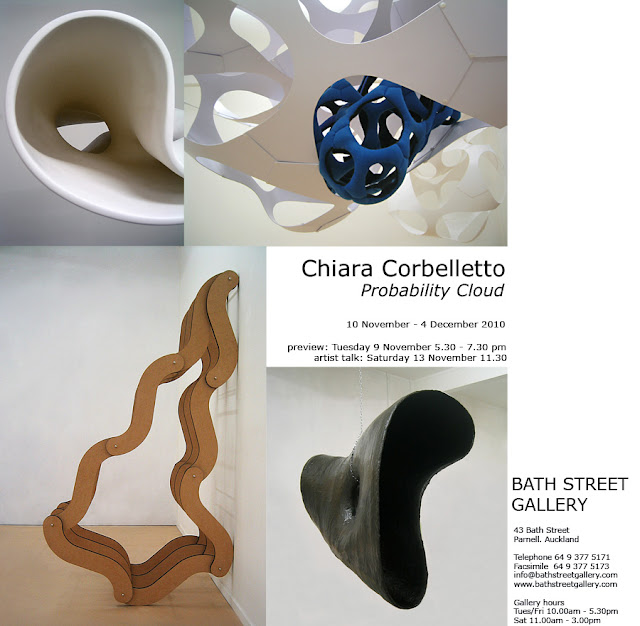 Chiara Corbelletto is an established artist with a strong record of exhibitions, sculptural installations, public commissions and collaboration around New Zealand.
Posted by Simona Albanese at 10:37 AM No comments:

Pier Paolo Pasolini: We are all in danger

From 3 November to 1 December at the Australian Cinématèque of Brisbane in South Bank there will be a wonderful contribute to the personality of Pier Paolo Pasolini, a film director, poet and writer.


Come and celebrate his success by coming and watching one of his movies at the GoMA!!!


Have a look to the gallery program:
Queensland Art Gallery-GoMA: Pasolini's program


Posted by Simona Albanese at 10:50 PM No comments: