Christmas decorations embellish the city we live in during the Christmas seasons and Rome is not an exception.
On Boxing Day my parents stayed in Rome, enjoying their break and so here a few shots by my dad in Piazza Navona first, where is the Fountain of the Four River by Gian Lorenzo Bernini.... and now full of stands for Christmas.

Between the stands the are more Babbo Natale and Befane ...which one would you like???


.... when they left Piazza Navona, they decided to carry on they walk and then stop in Piazza Venezia, where this time the Christmas tree was decorated and the Vittorio Emanuele II monument was illuminated...
(The Vittorio Emanuele II Monument in Rome is  known locally as “The Vittoriano”, “The Typewriter,” “The False Teeth,” or “The Wedding Cake.” This enormous monument was built in the early 20th century to honor a unified Italy’s first king. Later, the Tomb of the Unknown Soldier was placed inside, along with a museum to Italian Reunification)

...and even the Nativity was represented.... 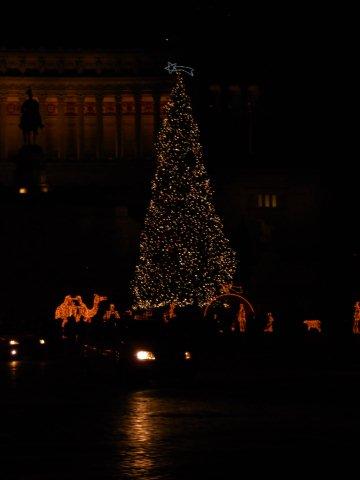