The Porticus of Octavia is in the Sant'Angelo area of Rome. It was constructed on the remains of a building put up by Q. Cecilio Metello Macedonico in 146 A.C by architects Sauro and Batraco between the years 27 and 23 A.C. Augustus commissioned the construction and devoted it to his sister Octavia after whom the Portico was named. It was a double-columned porch of a rectangular form (119 meters wide and 132 meters long) adorned by sculptures and paintings. The portico made an easier access to the Marcello theatre which is situated behind it. The portico served for the theatre as the audience stroll.
Subsequently it was rebuilt by Settimius Severe and then by Caracalla. The remains belong to the Severian restoration and includes the southern entry propylaea with two lines of Corinthian columns. Two columns of the right-hand porch, three of the rear file, a part of the entablature let alone the final arch are rested up to now. 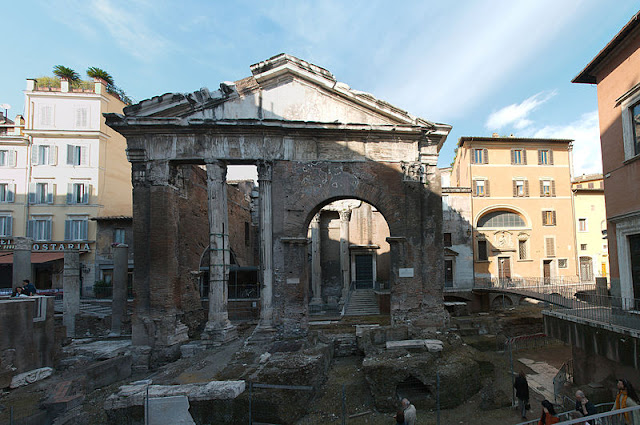 The Portico is still visible together....as many other Roman ruins has been integrated with the modern construction.

Buona passeggiata!
Posted by Simona Albanese at 10:52 AM